Today is kind of a sad day for me. It is Dale Earnhardt Jr’s last race as a NASCAR Cup driver. He is retiring from driving full time in the Cup series after this season ends, and today is the last race of the season.

I started watching NASCAR during the 2000 season, which was Dale Jr’s rookie season. My roommate at the time was a Dale Earnhardt Sr fan, so I would watch a race now and then. One weekend I saw an interview with Dale Jr. I thought that he was a good looking guy. So I decided to start watching more often. I eventually got hooked.

Dale Jr quickly became my favorite driver … and not just because of his looks. He is a down to earth guy who can really wheel a car. 🙂

These days, I plan my weekends around the race schedule. My Mother knows to not call during a race unless it is an emergency. LOL I’ve even made the trek to see a couple races in person (bucket list item).

I went to the fall race at Chicagoland Speedway last year. I didn’t get to see Dale Jr race because that was when he was healing from his concussion. But I got to see him race last month at Kansas Speedway. Not only did I get to see him on the racetrack, I also got to meet him in person … well, sort of. We were walking around the displays outside of the track Sunday morning and heard that he was doing an appearance at the Chevy Racing booth that morning. We stood waiting for about 3 hours. It was worth the wait. He spoke for about 15 minutes or so and then signed autographs. Because we had gotten there so early, we were in a prime spot for the autographs. I was THIS CLOSE (and no that’s not zoomed in at all) … 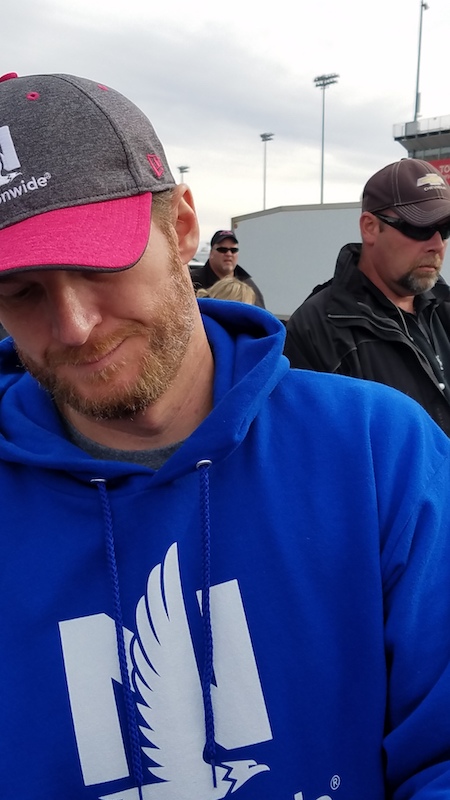 There have been so many tribute videos online over the season. Each one has brought tears to my eyes. I’m sure there will be more today that will bring more tears, but those tears are happy tears. NASCAR is one of my escapes, and I can thank Dale Jr for that.

At one of the displays at Kansas Speedway, they had a banner that you could sign that they were going to be giving to Dale Jr (it’s the banner in the featured image for this post). I got to leave him a message. He probably gets one of these at every track, but knowing that I was able to leave him a message makes me smile. It’s the little things. 😊 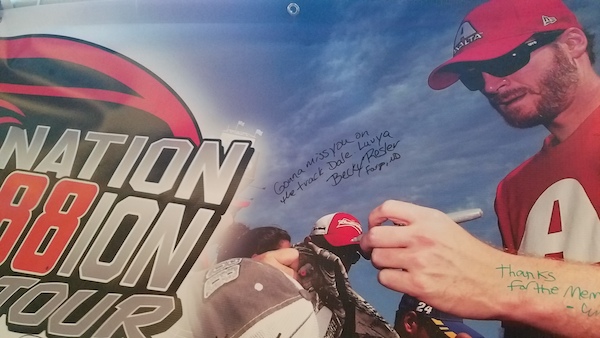 I’m still going to watch NASCAR next year, and I definitely want to go to more races. Dale Jr isn’t the only driver that I follow (I’m cheering on Martin Truex Jr for the Cup championship today). But it’s going to be weird not seeing him in a car on the track. He’s been in the sport and I’ve been following him for as long as I’ve followed NASCAR.

I’m proud to say that I am a member of Junior Nation.